India - The country of contrasts

India - The land of contrasts

The continental size of India and the immense social range of this nation, the confusing diversity of the country, its readiness to open up and rugged refusal, its countless contradictions make it difficult to understand. The tenth largest industrial nation, for instance, has an illiteracy rate of 40 percent and 450 million people below the poverty line, but at the same time it has hordes of highly skilled computer specialists.

India is thus a country full of contradictions, with children and women suffering the most from these contradictions. On the one hand, the emerging market offers visible technological progress and a sustained economic boom with average annual growth rates of more than 5%. On the other hand, there are people who live in slums in the poorest conditions.

One in three underweight children in the world lives in India.

Chronic malnutrition is a major cause of child mortality and affects the overall mental and physical development of millions of children. Almost one half of all children under three years of age are too small for their age as a result of chronically inadequate nutrition and three quarters of this age group suffer from anaemia. The poor supply of clean drinking water and sanitary facilities has similarly serious consequences. Only one third of the population has access to a hygienic latrine or toilet. In addition, only three-quarters of the rural population has safe drinking water, and in some states it is even significantly less.

The consequences: Every year, about 400,000 children under the age of five die as a result of diarrhoea. Millions of children fall ill with diarrhoea several times a year or suffer from hepatitis A, worm diseases, and infections of the eyes and skin. In addition, more than two million die annually from infections such as pneumonia, measles or tetanus. 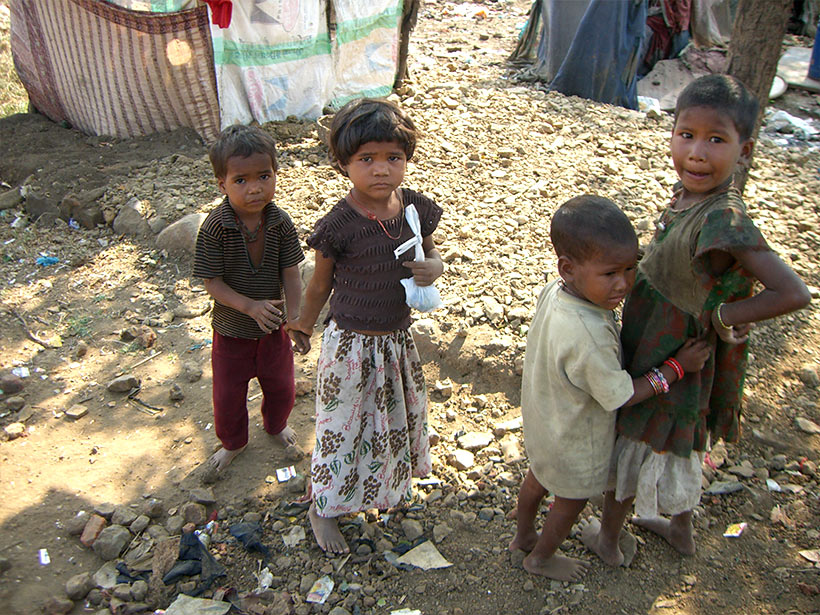 Out of 100 children born in India today

It is estimated that around 414 million children in India have to grow up in poverty and without any chance of education to later belong to the large group of disadvantaged illiterates who are excluded from society. About one in five children in India does not go to school and thus has practically no chance of ever learning to read and write. As a result, these children have no chance of finding a qualified job with appropriate remuneration. This situation only allows them to live on the fringes of society. Girls and women in India are often considered to be second class people. Illiteracy is particularly widespread among them, with an illiteracy rate of 54% in rural provinces.

Many girls who drop out of school for various reasons have to join the twelve million children who have to work. They do hard work - from working more than four hours a day in the household, to being exploited in the carpet industry or in quarries. All this contributes to the fact that countless female infants are killed shortly after birth or already in the womb. Patriarchal structures, low status of women and preferential treatment of male children are the main reasons that the survival of female infants and children in India is at risk.

Living conditions in the slums