At the end of the 18th century, the territory of Goa was extended by new conquests. Due to a political upheaval, troops came to power in 1835, rejecting religion and suppressing most religious communities.
Nevertheless, some patrons formed missionary communities in Goa, and the church encouraged them to carry on their faith. Fr. Custodio Caetano Barretto, a son of Goa, tried in vain between 1873 and 1883 to found a community of missionaries to evangelize the conquerors. The Community of the Missionaries of St. Francis Xavier, with its origin and headquarters in the Pilgrim Monastery in Pilar, Goa, was another attempt by the local Church to spread and strengthen the faith among Christians and non-Christians of the archdiocese.

At the time, the Holy Spirit inspired the virtuous priest Rev. Fr. Jose Mariano Clement Bento Martins of Orlim, Goa, to found the "Order of the Missionaries of St. Francis Xavier" on September 26, 1887, with headquarters in Agonda, canacona, Goa. This took place with the approval of the first Patriarch of East India, D. Antonio Sebastiao Valente, Archbishop of Goa, and despite the government's ban on religious orders since 1935. Four new companions joined Bro Benton Martin's Order on 26 September 1887. The vows were made secretly to the Patriarch, only after 8 o'clock in the evening in the chapel in Panjim, as the celebrations, such as the Holy Sacrament, which were part of the vows, could attract the attention of the government.

The Order of the Missionaries of St. Francis Xavier was born and Br. Bento Martins was the Superior of the Order. Nevertheless, the Order was on the verge of dissolution when six priests and two brothers reorganized it on July 2, 1939. The Order was transformed into a new Missionary Order, continuing the old one and revising the Constitution to enforce the Code of Canon Law of 1917. Basically, the local order wanted to bring Jesus Christ among the "ignorant". They wanted to achieve this by helping the poorest and untouchables.

Today, there are a total of 450 missionaries, the Pilar priests are distributed in four different provinces of India; Delhi in the north, Goa in the south, Kolkata in the east and Mumbai in the west. In 1986, the Pilar priests came to Bhopal and began pioneering work with the lepers. They also linked with the workers by giving education to the poorest of the poor and untouchable children, by building schools, youth hostels, dispensaries and rehabilitation centres.

The Order of Pilar Priests in Bhopal is a registered "Society", registered under the Madha Pradesh Societies and Firms registration act 1973, with registration number 25994, on 8.12.1993. The Order also has a foreign contribution number (FCA) from the Home Ministry to be able to accept foreign donations. 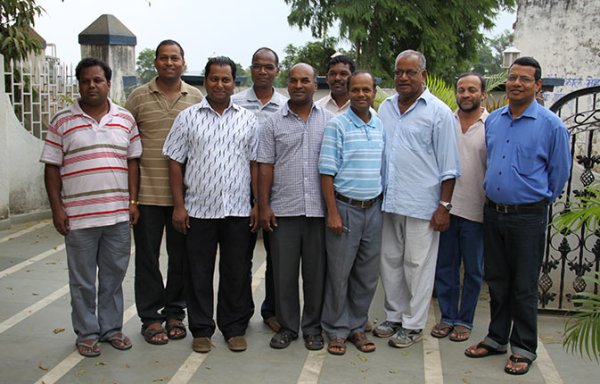 This seems to be true for the Bhopal Mission from the Kolkata Province.

Fr. Franklin arrived here in 1986 to help with the relief work of the Bhopal Archdiocese for the victims of the famous chemical disaster of 1984. Since then 28 years have passed. Victims and their friends and relatives are still waiting in vain for justice and compensation. Fr. Franklin has been here for more than 24 years, though not alone and no longer with the same small structure of relief work. A community of Pilar priests lives here in different communities. Shantinagar is the headquarters. Fr. Franklin did not expect to stay here for so long, let alone that the infrastructure, such as schools and social work would develop so far and well.

But thanks to his vision, Bhopal already looks a little different today. It is a complex with different apostolates, most of them focused on education of the underprivileged. There are three different main associations: Berasia, Bal Bhawan and Scholasticate. The Apostalate of Pilar Priests in Bhopal consists of kindergartens for children, Hindi and English schools for children and youth, and social work for nomads, lepers and a dispensary.